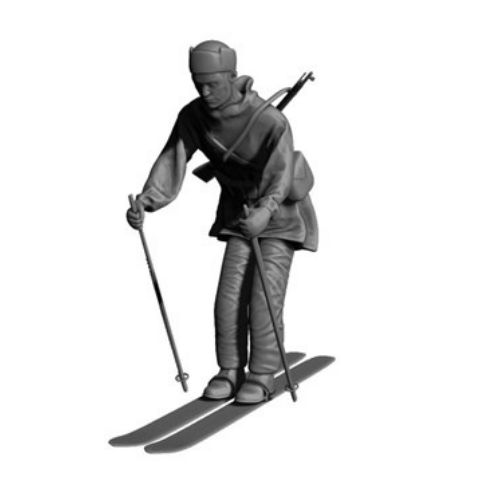 In this article we will comment on learnings obtained after designing a highly complex model. The model in question is a Finnish soldier from the Winter War with the Soviet Union in 1939.

After the relative success with our first model, “the hybrid”, we decided to start designing and testing historical models. A big part of the appeal behind the idea of Model Creator is the ability to choose armies from smaller countries. For that reason, we chose to create some less well-known models for testing - to showcase the future capabilities, and the depth of what we can do with Model Creator. We decided to design a Finnish soldier from the 1939/1940 Winter War with the Soviet Union, a North Korean soldier from the Korean War (1950-1953), a Rhodesian light infantry trooper from the Bush wars (1960’s and 70’s), Austro-Hungarian infantryman from WW1, Union soldier from the American Civil War, and a US Marine from Vietnam era armed with an AK47.

First step was again choosing a Designer. Designer 1 didn’t want to continue, as he was not very interested in our project due to his preference for modelling human faces in an artistic way. At this stage and after interviewing quite a few people we found Designer 2, Designer 3 and Designer 4, and we asked each one of them to do a different model.

Designer 2 was tasked with making the Finnish soldier and he did a decent job although it took him a fair amount of time. We asked for a typical, or even better stereotypical scene with the soldier in white camo overalls travelling on skis with his Mosin-Nagant over his back. As you can see on the picture above the design turned out nice.
Designer 2 warned us from the start that our design might be a bit too optimistic for the 3D print in the size we wanted it (1/35). Boy, was he right! The ski poles proved too thin and had to be made thicker, and the skis themselves curled and ended up in an U-shape. On below pictures you can see the 3D print output. Left ski pole broke, and while we taped the skis for the photo, you can still see their waviness. 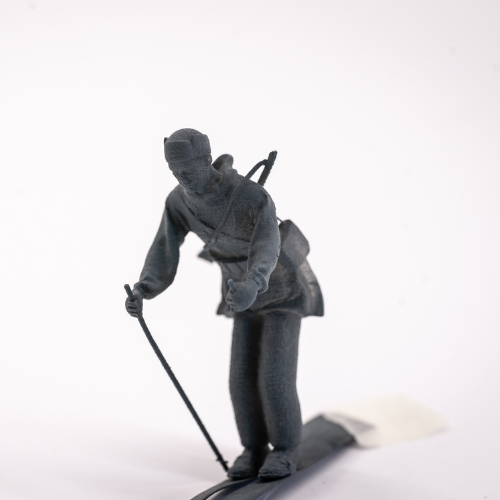 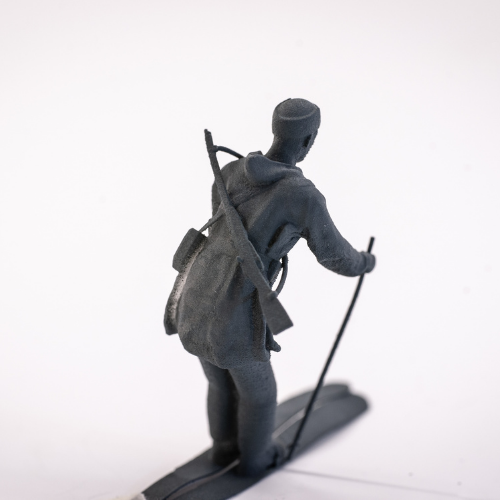 Although slightly disappointed with the outcome we have learned a valuable lesson. There are clearly limitations to 3D printing technology and materials, thus making 100% customization difficult. This does not diminish the value of Model Creator, it just adjusts the approach in designing the software to avoid unviable models.

In the next article we will talk about the Finnish soldier we ended up designing successfully.